My daily driver at the moment is a 2010 Volkswagen Jetta Wolfsburg Edition.  It’s a mish mosh of TDI Cup parts and GLI part that VW decided to put together for a one year 2.0T Wolfsburg Model.  Most of the parts are the same as other MK IV Jetta’s and I’m sure that the suspension replacement that is documented here is the same or similar for all.

I thought that it would be nice to put a performance suspension on the car, since I am an enthusiast, so I went for Neuspeed race springs and Bilstein touring struts and shocks.  My thought process was that the touring shocks would give a decent ride and still gain the performance that I was looking for. 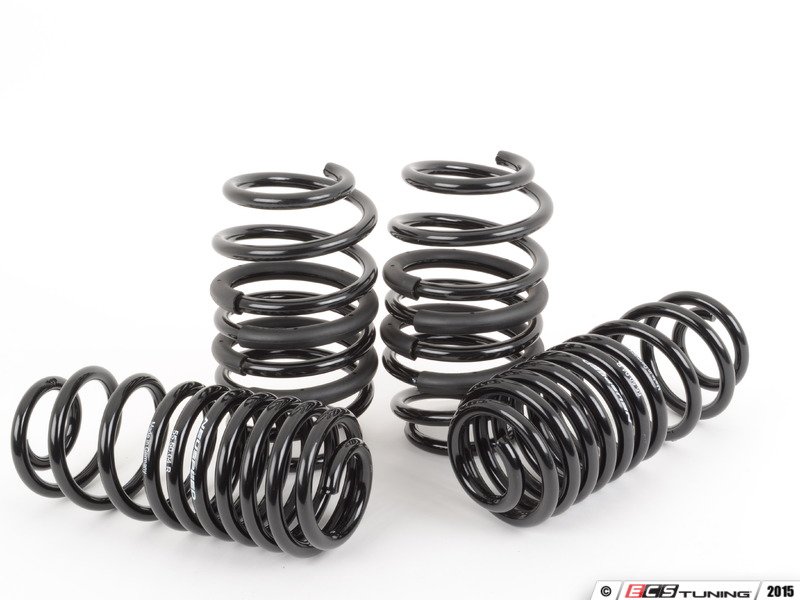 This job turned out to be much harder than I thought it would be.  I’ve replaced suspension components on other makes of cars before and thought I could get the job done in about half a day.  I was completely wrong; the drive axle’s needed to be removed from the wheel bearings in order to remove the struts.  I’ve seen videos online that say you can do it without removing the axle but I had no luck with their method, removing the axle is the only way I got the struts removed.

I have to say before I start the write up that I busted out the power tools for this job.  I was glad I had them.  I used my impact gun quite a bit during this debacle.  It was nice to have while tightening the sway bar end links and to loosen the driver’s side axle bolt.  It did not want to come loose!  I think this job is doable with just hand tools but be prepared for some frustration!

First order of business is to get the car in the air and safely on jack stands.  To do this you will need to pop off the little plastic pieces that cover the wheel lugs.

Then loosen all of the lug bolts while the tire is still on the ground.  This will keep the wheel from spinning while it is up in the air.

Once the lugs are loose, jack the car up so that the wheel is off the ground and remove the wheel from the hub.  Now would be a good time to get that axle bolt loose!  The way I do it with hand tools is: pop the center cap off the wheel and put the wheel back on the car.  The lower the car so the wheel is back on the ground.  Put a 24mm 12 point socket on a breaker bar and loosen that axle nut.  As stated earlier, this method did not work on my driver’s side axle nut and I needed to use the impact gun to get it off.  If you have power tools, use them!

Remove the center cap and loosen that axle bolt after lowering the car back to the ground, as you can see I needed to use the impact gun!

Jack the car back up, remove the wheel, and put a jack stand under it for safety.  You will then need to remove the 10mm bolt that holds the brake line bracket in place on the lower strut mount.

Remove the brake caliper; there are 2 bolts that are holding them on and if you need to you can see how to do this in my brake job post.

Remove the bolt for the sway bar end link.  I replaced my end links because they would not come out without persuasion, I had to cut one and the other one was left on the old strut.  If I would have used my impact gun before trying hand tools I believe I could have just removed the one attached to the strut and moved on.  If you have an impact gun, you should use it on the end links, no need to repeat my mistakes.  If you don’t you will need an Allen key and an 18mm socket wrench.  These are a pain to remove and be prepared to strip them out and not be able to use them.

If you are reusing the sway bar end links you will only need to remove the bolt on the strut.

Now you will want to remove the bolt that compresses the pinch mount for the bottom of the strut.  This is an 18mm bolt and an 14M (Male 12 point).  I used two sockets to make quick work of this bolt.

This is a triple square bolt. M14

The other side is an 18MM Bolt.

Now is the time to take the axle out.  The bolt should be loose already since we broke it while the tire was on the ground.  This kept the wheel from spinning when attempting to loosen the axle bolt.  I backed the bolt out almost all the way and then tapped it with a hammer to get the axle to pop out of the wheel bearing assembly.  This might not be the recommended way but it worked for me!

Once the axle is out and out of the way you can pry apart the pinch mount and attempt to get the bottom of the strut to come out of the mount.  This took a little bit of work and I had some success prying the mount apart with the pry end of a normal hammer and shaking it a little, the mount then starts to drop towards the ground.  You’ll see when you get it to move.  It won’t drop all the way since there is a little tab that will hit your hammer or prying device before it falls all the way.  You will then need to work from the bottom to get the strut all the way out.

Once that is done, you can loosen the 3 13mm bolts that are located on the strut towers.  You will need to remove the rubber weather stripping from the plastic (weather guard?) to be able to lift up the guard and gain access to these bolts.  Removing this piece is probably the best course of action but I just lifted it up.

Now that you have the strut assembly out of the car, you will need to use a set of spring compressors to compress the spring so you can remove the upper strut mount to transfer to your new struts.

Once the spring compressors have compressed the spring to a safe tension, you can use the strut mount assembly tool to remove the upper mounts from the strut.  I used a 13/16 spark plug socket and an allen key to remove these bolts.  Even though I purchased new upper mounts for the install I still needed to take them apart to get the boot and the bump stop out.

If you are installing aftermarket lowering springs, you will need to cut the bump stops before re-assembly.  The Neuspeed race springs that I put on the car required that I cut the last section off of the bump stop.

I cut the bottom portion off

Time for re-assembly!  Set you springs in the perches of the new struts, slide the dust sleeve onto the strut, followed by the freshly cut bump stop.  You will then put the upper strut mount on top of the spring and tighten the bolt.  I was unable to use that spark plug socket on reassembly but a normal wrench was able to get that bolt tight.

Set the new spring on the strut, it will have stops and a resting place for the spring, the boot is also slid on in this picture.

Use A punch (or whatever device you’d like) to spread the pinch mount apart. That’s where i did it before the bolt was in.

The rest of the assembly is the exact reverse of the tear down process.  I hope you found this article helpful and if you have any questions please leave a comment and I will try and get them answered.